A play-based resource assessment of conventional hydrocarbons has been performed for the Baffin Bay continental shelf area, West Greenland (Assessment Unit 2, AU2). Four play levels have been assessed, with an estimated mean for the undiscovered resources of ~9,100 MMBOE risked recoverable.

The assessment results presented are based on all available data collected and interpreted by the industry, GEUS, NUNAOIL and the Greenland Ministry of Foreign Affairs and Energy (MFAE) and reflect the state of geologic knowledge of the West Greenland part of the Labrador Sea – Davis Strait area at the time of the assessment. Any future drilling and evaluation of the petroleum systems and plays based on new data within this area will add to the geologic knowledge and will therefore lead to a refinement of these assessment results.

The results of this study are reported in an extensive ArcGIS project supported by a comprehensive slide package which includes 11 presentations, reflecting the workflow of the project, including:

The Player and ArcGIS projects together with the slide pack are available for the petroleum exploration industry at no cost and can be downloaded from the project website.

The project is carried out to facilitate business decisions and guide the industry towards the most prospective areas, as well as helping the Greenland Authorities and politicians in strategic decision making and in planning for future licensing rounds. In addition, it will support the definition of new G&G de-risking initiatives. 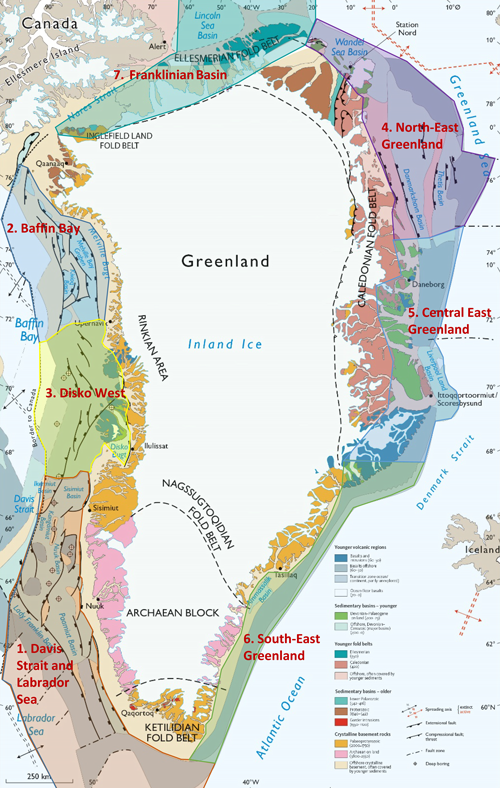 The project is mainly sponsored by NUNAOIL and is carried out as a collaboration between GEUS, NUNAOIL and the Greenland Ministry of Foreign Affairs and Energy (MFAE) hosted by GEUS. The work is based on all available existing data provided by the industry, GEUS, NUNAOIL and MFAE. Furthermore, it includes a regional basin modelling study, carried out in-house at GEUS. The results will be reported as the work on the individual assessment units are finalized.

A hydrocarbon resource assessment of the Greenland continental shelf north of the Arctic Circle has previously been performed as part of the U.S. Geological Survey (USGS) Circum-Arctic Resource Program (Schenk 2011; Moore & Gautier 2017). This assessment, however, used a probabilistic approach heavily relying on analogue modelling comparing the Arctic assessment units with similar but geologically better understood and better calibrated petroleum provinces elsewhere in the world. The study therefore only provided a broad overview of the possible resource potential within the assessment units of the study. 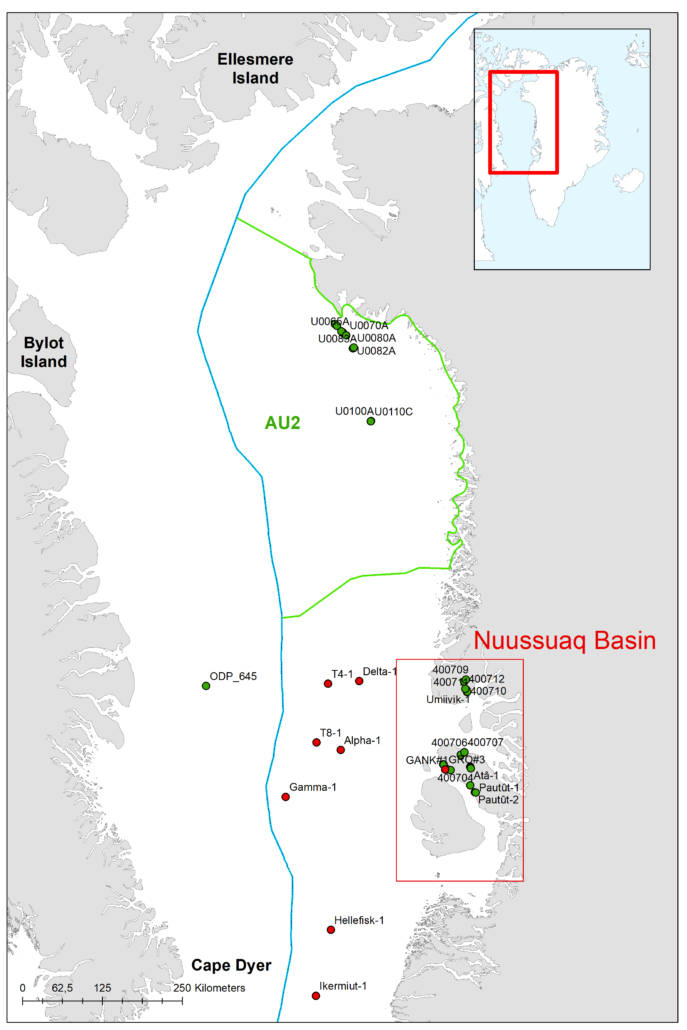 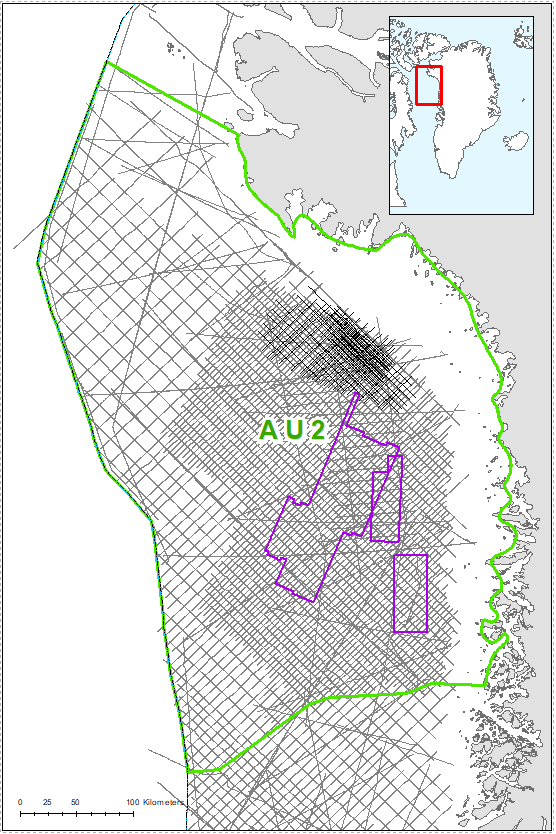 No exploration drilling have been carried out in Baffin Bay  and the area is  characterized as a frontier exploration region. Exploration efforts in West Greenland have been restricted to five periods (Christiansen 2011):

Following the collapse of the oil price in 2014, most licences were relinquished, and exploration activities have almost ceased.

Fifteen exploration wells have been drilled in West Greenland, but no commercial discoveries have been made.

Figure 4 summarizes the post-well analysis of the 11 stratigraphic boreholes drilled in AU2. 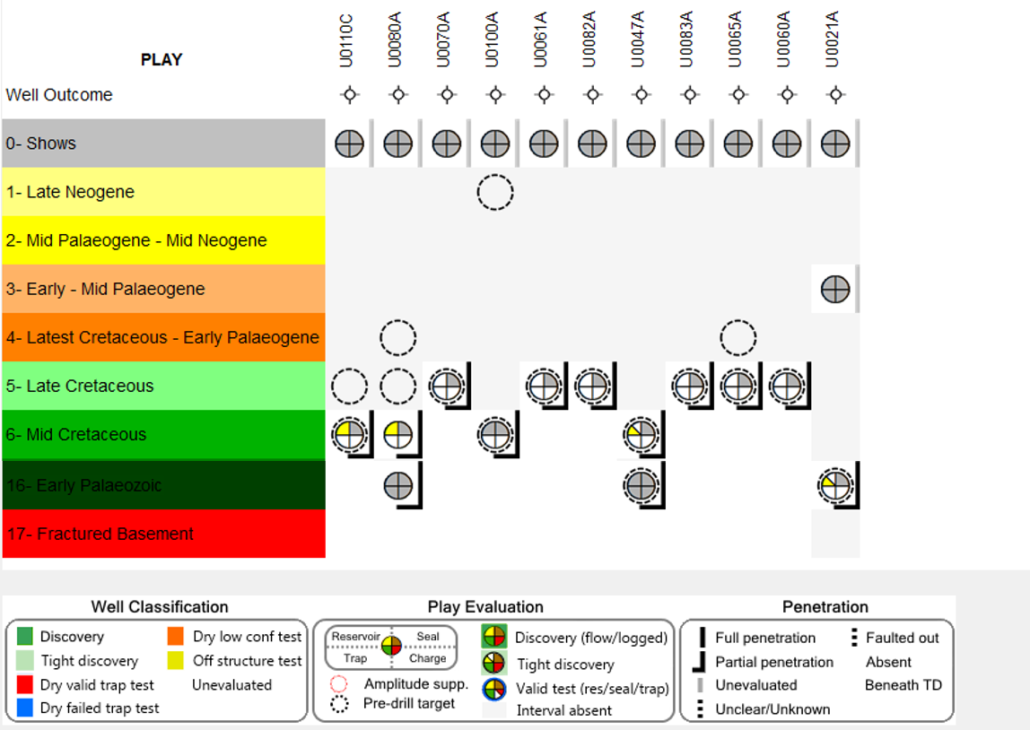 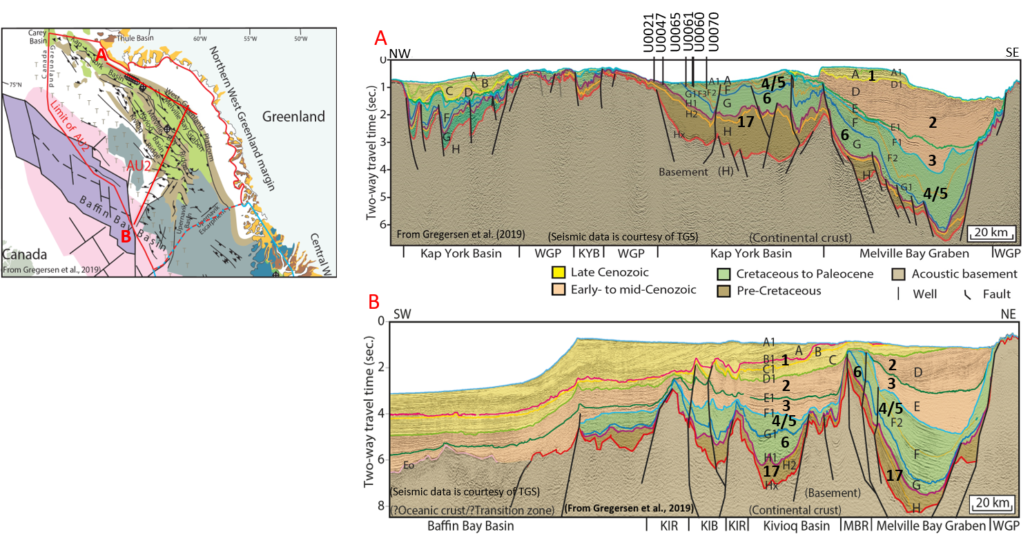 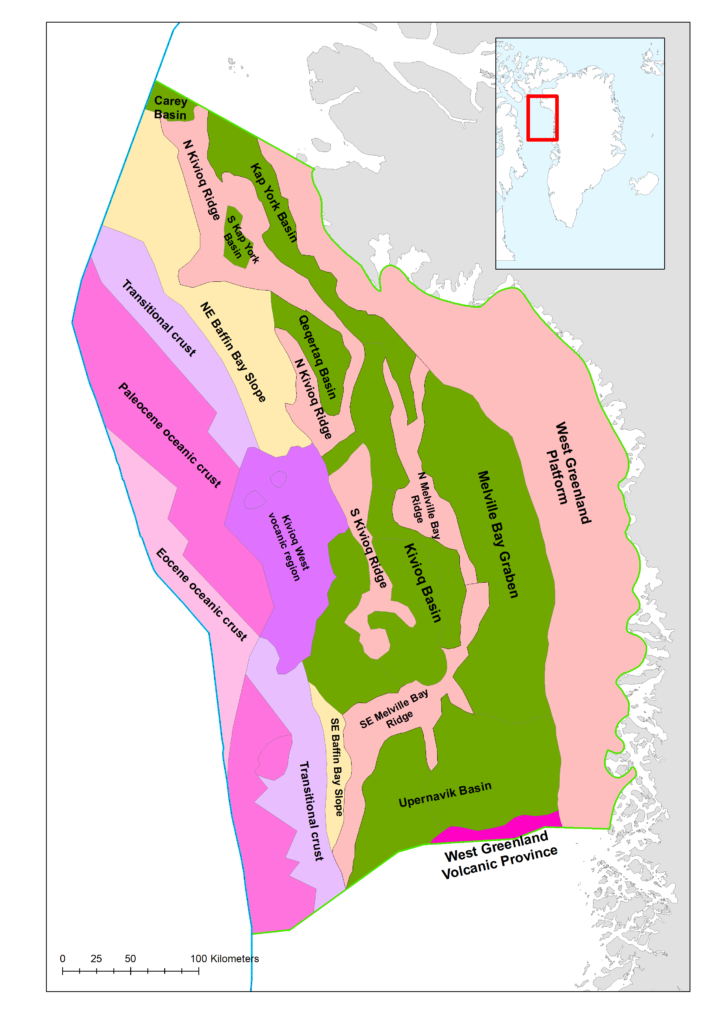 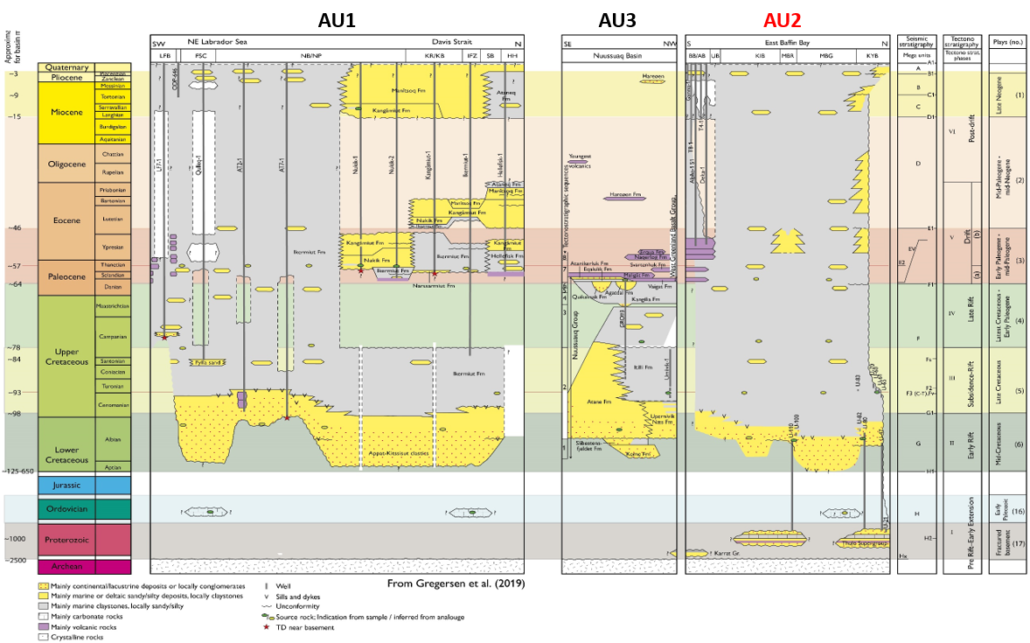 The ?Aptian/Albian – earliest Cenomanian Early-rift Phase is characterized by the development of large extensional fault blocks and deposition of alluvial and lacustrine sediments.

A marine drowning episode separates the sediments of Early Rift Phase from the early Cenomanian – Early Campanian Subsidence (local rifting) Phase. This phase was characterized by deposition of marine muds and sands. The presence of a volcano of Late Cenomanian – Early Turonian age in the Nuuk Basin indicates that local rifting took place during the early stage of this phase (Knudsen et al., 2020).

A change in stress regime occurred during the initiation of the Early Campanian – Early Paleocene Late Rift Phase and in central West Greenland, the arrival of the North Atlantic Mantle Plume resulted in major uplift, erosion, and canyon incision. The Late Rift Phase was characterized by development of large deep-water basins and deposition of reservoir sands took place in basin-floor fans, turbidite slope channels and large canyons.

During the Early Paleocene – Eocene Drift Phase, formation of oceanic crust took place, causing separation of the continental margins of Greenland and Canada with north-east to northward movement of Greenland. From Paleocene to Eocene the central West Greenland Cretaceous – Early Paleocene basins were covered by volcanic rocks of the North Atlantic Igneous Province while deep marine deposition
took place in the Baffin Bay basins. Formation of oceanic crust was associated with compressional tectonics and the development of strike-slip and thrust faults, pull-apart basins, and inversion structures, most pronounced in the Davis Strait and Baffin Bay regions.

During the late Cenozoic – present-day Post-drift Phase tectonism diminished, though some intra-plate vertical adjustments occurred, and a series of uplift events took place along the passive margins. The latest basin development was characterized by formation of thick Neogene to Quaternary marine successions including contourite drifts and glacial related shelf progradation towards the west and south-west.

Based on seismic interpretation, well and outcrop data, 17 plays have been established for all seven assessment areas of the Greenland continental shelf. Seven of these plays are present in AU2 (Plays 1-6 and 17; Fig. 7). Six source rocks have been documented on the West Greenland continental margin and reservoir rocks are present virtually at all stratigraphic levels. High-quality regional seals are well documented in Cenomanian-Turonian, Campanian and Paleocene shales (Fig. 7).

Six possible source rocks have been documented from geochemical analyses of oil seeps and mudstones in outcrops, dredge samples and well cores along the West Greenland continental margin (Bojesen-Koefoed 2011; Bojesen-Koefoed et al. 1999). Source rock intervals include Ordovician, Albian, Cenomanian–Turonian, Campanian, Paleocene–Eocene and Miocene. Several of these source rocks are also proven in eastern Canada from outcrops on Ellesmere Island, oil seepage in Scott Inlet and wells on the south-east Baffin Bay and Labrador continental shelves (Balkwill et al. 1990; Núñez-Betulu 1993; Fowler et al. 2005). The oil seeps described from the onshore Nuussuaq Basin and offshore East Canada, the Kangâmiut-1 gas kick and the gas discoveries on the East Canadian continental shelf provide evidence that, at least in those areas, petroleum systems are or have been active.

Table 1. Characteristics of the three expected source rocks in AU2.

These data have been used as input parameters to the kinetic model in the basin modelling study for the AU2 area.

Basin modelling indicates that these may have reached thermal maturity throughout or in parts of AU2. Consequently, the charge model for the play analysis incorporates the possibility for charge from all three mature source rock intervals.

The assessment process for the resource evaluation of AU2 is summarised in the “Yet-To-Find Triangle” shown in Figure 8. Basin evaluation is the basic activity describing the structural and stratigraphic framework leading into construction of Gross Depositional Environment (GDE) maps and identification of source rocks, reservoirs and regional seals that form the basis for definition of the plays. IES PetroMod v16.2 has been used to compile and setup a 3D basin reference model to assess maturity and possible migration for expected source rock intervals. 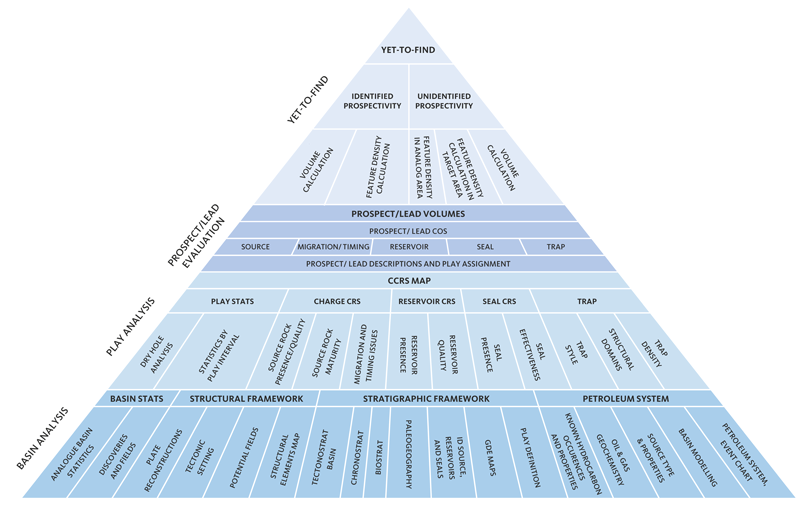 A multiple charge scenario is applied for each play since three source rock intervals have been identified on the West Greenland shelf: Albian, Cenomanian–Turonian and Paleocene (Bojesen-Koefoed 2011). This means that for each play a specially designed composite charge workflow is applied to assess the charge-migration risk. A detailed description of this process is found in the PowerPoint presentations available on the data portal.

Volumes for leads mapped by the industry, GEUS and NUNAOIL have been integrated into the play evaluation and the identified
prospectivity has been calculated. For the volume calculations of individual leads the oil-water contact has been picked halfway between the top of the structure and spill point, since source rock quality analysis does not support fill-to-spill scenarios. The Yet-to-Find analysis is
based on a feature (lead) density calculation approach for each of the identified play intervals calibrated with data from the most extensively explored previous licence areas (analogue areas) in AU2.

The resource assessment provides an estimate of the play-based Yet-to-Find potential of conventional hydrocarbons. The assessment includes Plays 3, 4, 5 and 6 (Fig. 7). Plays 1 and 2 are located at very shallow depths below seabed and are therefore not considered prospective.

The first step in the Yet-to-Find Assessment was to make Gross-Rock Volumes for the leads mapped by the industry, GEUS and NUNAOIL in AU2. A total of 106 leads have been evaluated in Assessment Unit 2 (Fig. 9). Gross-Rock Volume calculations were made in Player® based on area-depth pairs from the top of structure to spill-point. Area-depth pairs were derived from either mapping of the structures in Petrel or digitizing of closure and contour lines in ArcGIS from company reports. For identified structures without area/depth pairs (unevaluated leads), area yield values have been applied. 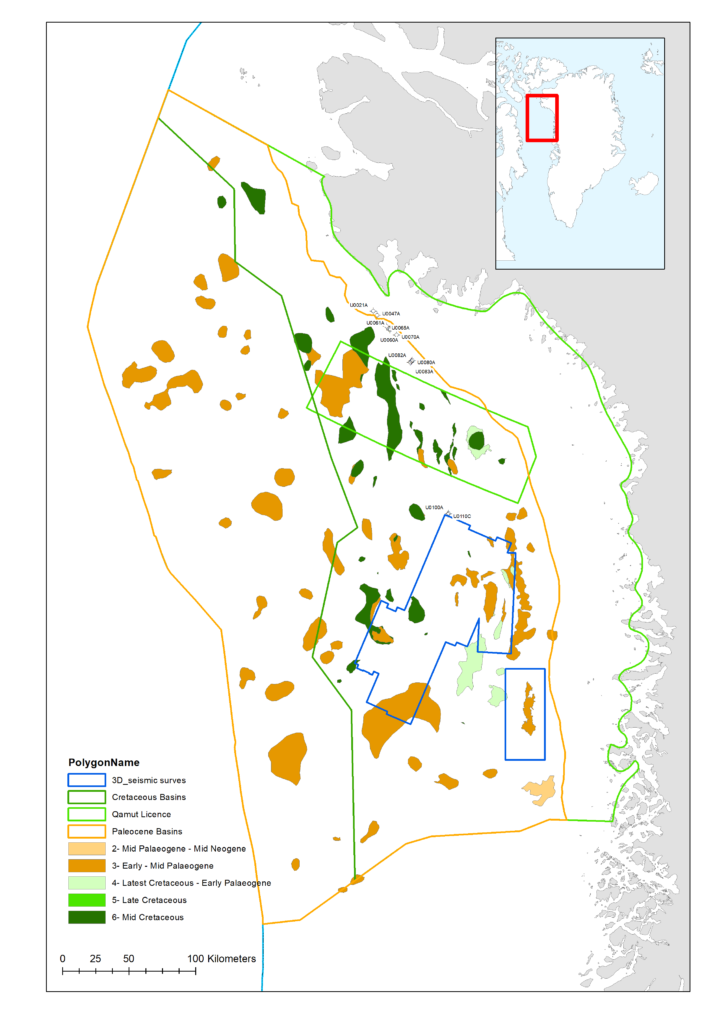 Figure 9 – Identified leads in AU2. Analog and target areas for the Yet-to-Find calculations are also shown.

The known prospectivity appears from integrating the calculated identified lead volumes (see section above) with the CCRS maps providing the risked volumes for the leads.

The unidentified prospectivity analysis is based on a Feature Density (FD) calculation approach for each of the identified play intervals, calibrated with data from the most extensively explored previous licence areas in Assessment Unit 2 (Fig. 9).

The most extensively explored areas (analog areas) in AU2 are the:

The unidentified prospectivity is the “Future Target Area FD (per play)” × “Mean volume per Feature MMBOE)”. 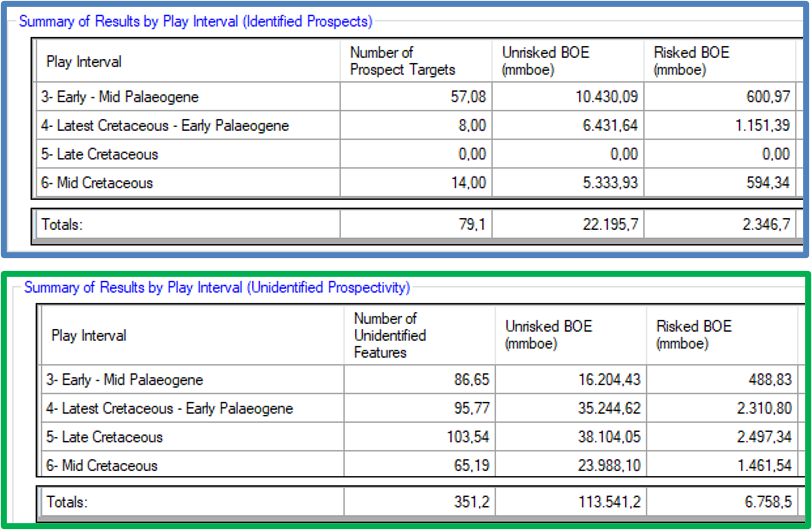 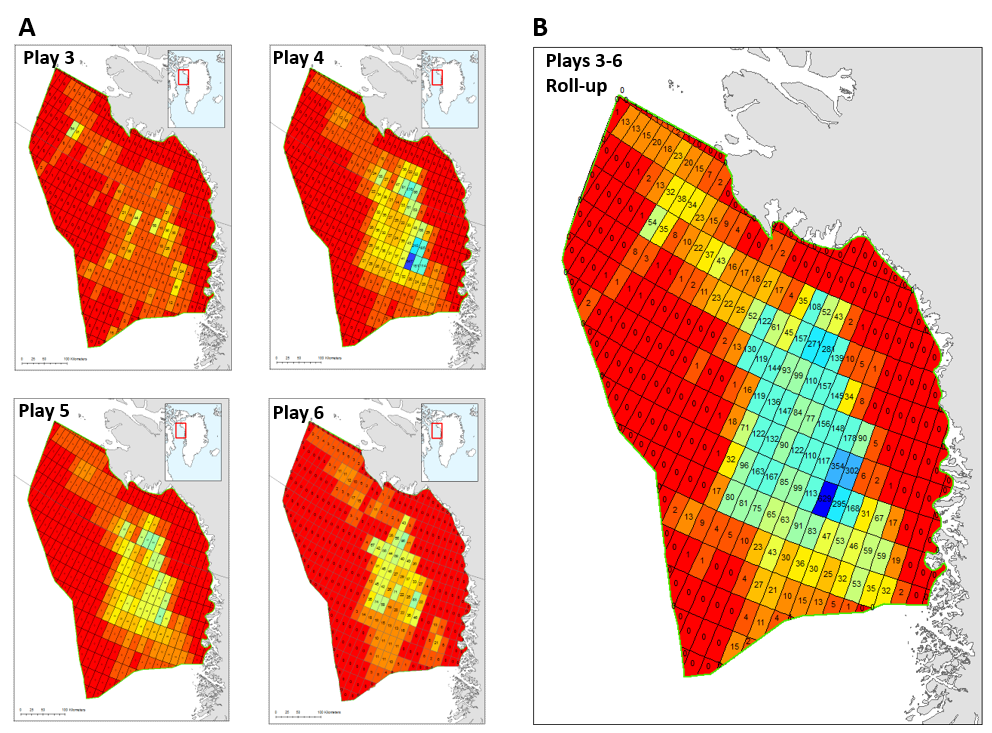 The results from this study including a Player® ArcGIS project and an extensive slide pack are available for the petroleum exploration industry by contacting managing director of NUNAOIL, Signe Ulfeldt Hede.

Oakey, G. N. & Chalmers, J.A. 2012: A new model for the Paleogene motion of Greenland relative to North America: Plate reconstructions of the Davis Strait and Nares Strait regions between Canada and Greenland. Journal of Geophysical Research 117, B10401. doi.org/10.1029/2011JB008942 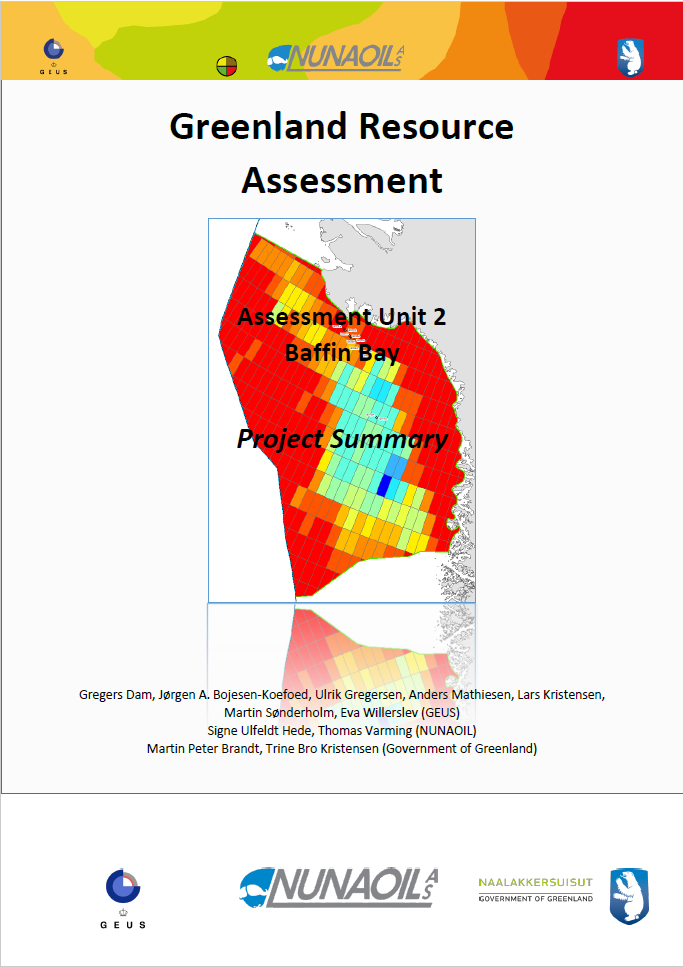 This website uses cookies to improve your experience while you navigate through the website. Out of these cookies, the cookies that are categorized as necessary are stored on your browser as they are essential for the working of basic functionalities of the website. We also use third-party cookies that help us analyze and understand how you use this website. These cookies will be stored in your browser only with your consent. You also have the option to opt-out of these cookies. But opting out of some of these cookies may have an effect on your browsing experience.
Necessary Always Enabled
Necessary cookies are absolutely essential for the website to function properly. This category only includes cookies that ensures basic functionalities and security features of the website. These cookies do not store any personal information.
Non-necessary
Any cookies that may not be particularly necessary for the website to function and is used specifically to collect user personal data via analytics, ads, other embedded contents are termed as non-necessary cookies. It is mandatory to procure user consent prior to running these cookies on your website.
SAVE & ACCEPT
Scroll to top